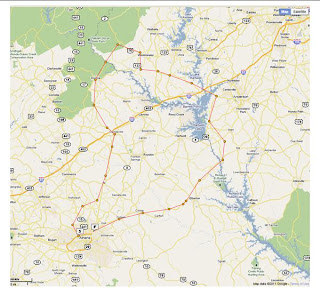 Since Marie took Landon over to Charlotte for the start of Spring Break, I had an open Sunday so I took advantage of it with a couple of co-workers. I laid out three different routes and had them choose they chose this one because I said it was only about 170 miles - missed that it was closer to 205, don't know how I missed it.

But it was fun riding with Roger. His riding style closely matches mine and we seem to have a good sense for when we need to stop. Plus he loves to go hard in the curves at times. Tim is a fun rider, but is mostly in the laid back cruising sense instead of wanting to eat up the miles. But I enjoy both of their company on rides. Anyway, I think this is a good afternoon route and one that has a touch of the mountains and a little bit of the lakes.
Posted by ACCBiker at 8:10 AM