Sometimes the best laid plans go wrong after everything was going so right.

Since I could not do the planned ride a few weeks back, once I saw an opening my schedule I jumped at the chance to pick up the remaining 6 Lions Club stops that I needed to finish the required 16. One of the aspects of Long Distance riding that I am not completely comfortable with and need some practice is early morning riding. So I decided to use this trip as a chance to work on those skills. So off I go at 4:00 a.m.

I haven't gone 1/2 mile out of the subdivision when a family of deer decide to cross the road in front of me. Not directly, but close enough that I can easily make out individual hairs on their bodies as I pass. This is exactly why I don't like early morning riding. Though, the moon was rising late in the night (or early morning) on this day and the sliver crescent shape coming up over the eastern horizon was incredibly beautiful and it was fun to watch it slowly rise in the night sky during the first 2 hours of the ride. 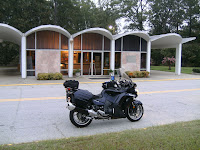 I make my way over the First Georgia Welcome Center on US 301 shortly after sunrise just as planned. As much as I think it is really neat to have this building as part of our history, I question the cost to keep it running - especially since how many people (more importantly visitors) enter Georgia along US 301 these days. I am guessing it won't see the next decade.

After the Welcome Center it is down and over to the coast to visit the Jekyll Island Club. Traffic was very light on I-95 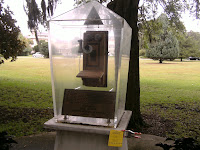 and I was making good time until my drink cup holder decided to break. I quickly make my way over to the nearest exit ramp to figure out plan B (basically shoving it into the tank bag). I elect to get off I-95 just north of Brunswick so I can ride over the bridge to Jekyll, traffic was not as bad as I feared along US 17 coming into Brunswick, but I certainly lost a lot of time. Jekyll is under construction right now so I really did not do much exploring on the island. Paid my $5, visited the phone, and then back off the island.

Going to the Lions Camp along US82 was uneventful. It is nice to see what it looks like (boring) in the daylight as compared to the midnight ride from Cape Fear. The Camp is right next to a State Park, but easy enough to get to and then back into Waycross. The smell of smoke from the swamp fires is still heavy in the air. 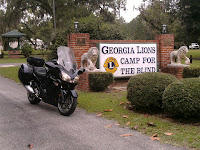 Just north of Waycross the weather starts to turn and a line of storms is coming at me from my left. I luckily out run them and make it into Baxley just after 12. However, the tip end of the storms catch up with me and I get wet for about 10 minutes. Nothing too serious.

Ridding through south Georgia is pretty at times and boring at others. The really small towns are quaint and the smaller cities are cookie cutter versions of each other with the same fast food restaurants and strip malls. I can't imagine what it is like living in them. Into Soperton, I head (after running through another line of storms) and are greeted by a swarm of gnats. Gotta love south Georgia. I found the news building after making a loop around the downtown area.

I am just about on schedule, maybe a little off due to fooling around with my mp3 set-up before getting into Waycross, but overall I think I should be back in Athens around 4. Even start thinking about stopping by the office. Then I get to I-16.

For the first 30 minutes, I am flying on I-16. Averaging 80+ and barely keeping up with most of the traffic. Then just west of Dublin, the traffic jam starts. I elect not to take the exit and stay on I-16. BIG MISTAKE. An hour and about 2 miles later, I slowly crawl my way through the work zone and start back up to speed. Sitting on I-16 in 95 degree weather is as bad as it can get on a bike.

I roll into Macon about an hour behind schedule, find the marker and take a picture. Though, mainly because I am cranky, tired, hot, and thirsty, I take the picture but it is blurry as hell. Instead of taking a deep breath and thinking it through, I say f*ck it and move on. The picture definitely does not meet the requirements of having your name on the passbook clearly visible, but I am going to send it in anyway. What frustrates me the most is the fact that I know better when it comes to pictures. Lesson learned since no RallyMaster would accept the crappy picture. Would you? 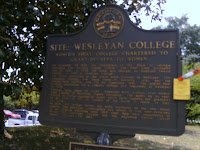 Anyway, I make my way out of Macon and head home. Truck traffic is heavier that I would like, but I make it home a little after 5:00 p.m. So overall 13 hours of travel to cover 650 miles. Certainly not a record, but it was a fun day.

That dreaded 3:30 a.m. phone call. We all know that they exist and we all know that over time we all will get our share, but nevertheless, they are never easy. Marie, Landon, and I had a good week visit with Mom and Beth, Travis, Carter, and Austin. We get home on Sunday night and all seems well. At 3:30 a.m., Mom calls to tell us that Duane died quite unexpectedly. Well, we all know the right thing to do is to get back over there, but the question is do I leave right away or in the morning? Given the fact that Mom was just now leaving the hospital and was trying to get some sleep - leaving now and getting there around 10 really doesn't make a lot of sense. So the plan is to go into the office button up a few things and be on the road a little after 9.

Well things never go completely as planned but I manage to get out of the office a little after 11 and on the road to Mom's by 11:20. It was by far one of the fastest trips over in my 10 years of making the trip - I think the September 2002 trip over was faster only because I didn't stop at all on that one. I averaged a running speed of 73 mph the entire way and only had a 7 minute gas/pee stop in Camden. Because I was running so well on the interstate, I stayed on I-95 to US 74 instead of heading towards Conway at Florence. The distance is about 17 miles longer but the GPS says it is about 2 minutes shorter - something that seems about right. It was hot the entire way - well over 90 the entire time. I got in to a good routine of drinking every 10 minutes or so. Thankfully, it was an easy trip over and I got to my Mom's at 5:00 p.m.

After the week helping Mom as best as I could, I headed back on Friday morning at sunrise. It was a cool ride back (never got above 75) and one that I pushed about equally as hard - averaging the ride at 70 mph with just a couple of gas/pee stops due to fuel management issues. I did confirm that the Conway route is shorter in distance but slightly longer in time (mainly due to lower speeds on 501 as compared to 74). I pulled back home a little after 11:30 a.m. and headed back to the office.

I also confirmed that the motorcycle odometer is generous by about 1.44% (hey, gotta do something to keep the mind sharp while grinding out interstate miles). In other words, for every 100 miles of riding, the odometer will read 101.4, for every 300 miles it reads 304.3.

Yeah, I got to ride the bike, but I hate it for my Mom.
Posted by ACCBiker at 9:00 AM No comments: