Decided to play hooky this day to do an easy 650 miles in about 12 hours while trying out the set-up on the bike for the upcoming Cape Fear rally.

The ride out of pr 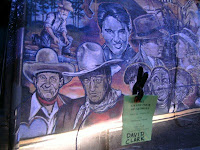 e-dawn Athens was simple. Heck even traveling through downtown Atlanta at 6:00 a.m. was a piece of cake. I don't think I dropped below 60. Rolled into Villa Rica right off I-20 shortly before 7:00 a.m. and easily found the mural needed as part of the Tour of Georgia ride. Now that most of the interstate riding is behind me, the fun can begin as I make my way down the western portion of the state.

It is a pretty direct shot down a few Georgia state highways between Villa Rica and La Grange where two different locations for two different summer rallies/tours happen to be located. The first stop is an Historical Marker for the Nancy Harts. This is my first location collected as part of the Tour of Honor ride that I am doing in support of the Wounded Warrior project. The location is easy enough t 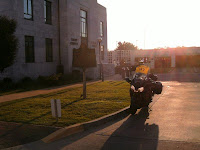 o fine - but faces due east. Given the rising sun, my camera really had a tough time exposing the shot. But I think it is good enough for the tourmaster's review so I head a block south to the fountain in the middle of the town square. It really is a beautiful square, lined on all four sides with trees and a nice wrought iron fence. It would be great if Athens had something si 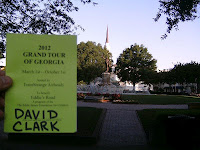 milar. But the college kids would probably just destroy it any way - kinda like they have with most of downtown (but that would be the subject of another post).

From downtown LaGrange, Ms. Garmin routes me through a neighborhood and then right onto I-185 south. I don't remember Streets and Trips having the same route, but this one was certainly easy. The rest of I-185 is the typical boring straight and fast ride down to Columbus. I really hate ridin 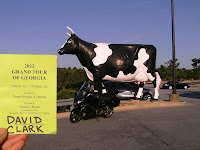 g through Columbus, but the Georgia Tour has the next spot just off the Interstate so it was a quick stop for gas and next picture. If all of my trips into Columbus would be this easy. From Columbus it is over to Plains. I am really looking forward to this stop since I have never been to Plains before and have come to admire a ot of what Jimmy Carter has done since leaving office (I was only in elementary school during his Presidency, so I really can't comment on what he was like as a President - but I would challenge you to name another former President that has done so much throughout the world as Mr. Carter has).

The ride into Plains really starts to reveal South Georgia. The small towns that time has almost forgot and the large expanses of 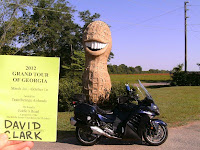 farmland that dot the landscape. Coming into Plains, it is clear that Plains would be just like the other towns if it wasn't for the Carters. However, even with their presence, the town is pretty sleepy and still appears to cherish a simple existence. The stop in front of the Giant Peanut from Indiana is easy enough to find. So I point the bike even further south. 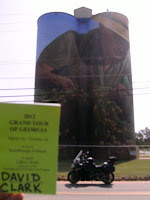 The next stop is a giant mural on some grain silos in the small town of Colquitt about an hour south of Plains. More of the same landscape has you head further and further into South Georgia. Even though most of the state highways here are just two lanes. There is so little traffic that even when you do find yourself behind someone, it is about 20 seconds before you can pass. Since it is still early spring, the fields are alive with activity of the various planting rituals. So the scenery is quite interesting to watch - though the only real thought that goes through my head is that I am glad that I am not a farmer. Watching the plume of dust that follows the tractor through the fields clearly show how hard and dirty farming is. Finding the mural in Colquitt should have been a piece of cake, but I missed it on my first pass through town. Sometimes you really need to get your eyes off the GPS and simply look up. The size and detail of the mural was impressive. Again, my camera was unhappy in trying to figure out what to focus on - either my passport book or the mural. So I think it wound up with something in between - which caused both the passport and mural to be a little out of focus. So, the picture really doesn't do the detail and color of the mural justice.

The next stop w 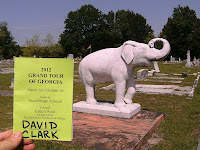 as an Elephant marker in a grave site over in Moultrie. Again, a simple hour ride over to Moultrie. Nothing really of note to pass on through the ride east. Pulled up to the grave site and snapped the picture and moved on. Shortly after getting back on the highway, I come across a pretty ugly accident, looks like a small sedan pulled out of a side street in front of a pick-up truck. The impact looked like it launched the sedan into the roadside ditch before sending the vehicle airborne into the field where it landed on it's roof. There were enough state patrol and EMS works on the scene, so every vehicle coming onto the scene were quickly being rushed through the site. Surprisingly enough, it didn't look like anyone was seriously injured given the general body language of the emergency workers. I hope that was the case. 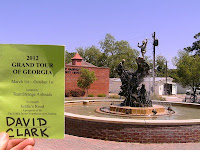 The last couple of stops for the day were just off I-75. Another city fountain in Nashville, GA followed by Bear in Macon. Finding both locations were pretty simple - again once I stopped exclusively relying on Ms. Garmin to tell me what to do. Coming up out of Macon was simple, I did pass another Georgia Tour location at Rock Eagle but didn't stop since that location was planned to b 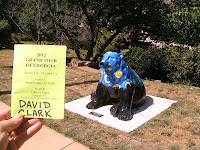 e bagged as part of the later coastal ride that I have planned. The only traffic to speak of during the entire trip shows up in Oconee County where they are resurfacing US441. It has been a cluster since they started a few weeks ago. The only good part of the project is that the weather has allowed them to stay ahead of schedule.

I make it back into Athens in just under 12 hours - for 652 miles. I stayed on schedule the entire ride and once again proved to myself if I simply "Plan the Ride" and then "Ride the Plan." Advice that I must adhere to in the upcoming Cape Fear if I want to be competitive - which I do.
Posted by ACCBiker at 5:31 PM