Sept 10th - Welcome to the IBA

Well, I finally did it.

Ever since I first became involved with long distance motorcycling, it has been my goal to properly document an Iron Butt ride. I have had a few opportunities over the past few years, but just never to the time to document the ride to the high standard that the IBA requires, so I never sent in the rides. But I was determined to check that off the list in 2011 and thanks to the MTF, I had the opportunity.

Every other year the MTF has been sponsoring regional Saddlesore rides throughout the year - typically in May, June, and September. Fortunately for me, the September ride was starting in Byron, GA (about 100 miles south of Athens). So I signed up. The ride offered two options - a traditional out and back SS1k down to Naples, FL and back on I-75 and a more challenging in-state route. Usually, the in-state routes are limited to current IBA members, but after pleading my case to the sponsor (not really, just asked nicely and gave them some reasons why I think I am qualified to ride the in-state route - mainly due to my Not Superman and Cape Fear rally experience) I was given the green light. 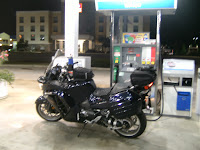 The ride started a little after 5:00 a.m. on Saturday as I left the Chevron in the dark heading to Columbus. It took me about 15 minutes to get into the grove of riding and comprehending what I have in front of me for the day. But, I quickly started grinding out the miles. The first check point in Columbus was an easy in and out at the pump and I headed up to Dalton via Atlanta. There was very little traffic out on Saturday morning and I made amazing time up I-185, I-85, I-285, and then I-75 - by the time I rode into Dalton, I was almost 45 minutes ahead of schedule. I then proceeded to lose a little bit of time while fooling around with the pumps and the station manager to get a good receipt before saying screw it and went next door to BP and got one. However, my left highway peg would not say up and given the fact that I was about to enter the mountains, I didn't want it down. So I rigged up a way to keep it up with velcro. I later found out it was just a stuck spring that once I cleaned it out really well it hasn't given me any trouble.

After leaving Dalton, I headed over to the mountains. I was both looking forward and dreading this part of the trip. There is nowhere else I want to ride than the mountains in the early fall, but so does everyone else. So I was expecting a fair amount of bike and vehicle traffic along US76. I didn't count on it being the Thunder over Georgia weekend. Mostly Harleys traveling in packs of about 6 bikes under the watchful eyes of the Georgia State Patrol. But it wasn't too bad, sure I lost some time like I knew that I would, but overall, I was able to keep moving. The only trouble was when I went too hot into a turn and had to use the pull-off for extra riding room. Just a dumb, inattentive mistake. 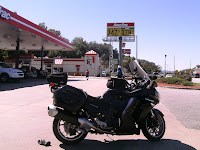 After the mountains was US441 through Clayton, down into Athens and Madison - obviously it is a route that I know well and just kept moving. The UGA/South Carolina game was the same day of the ride and I was worried about gameday traffic. There was some, but not a lot. So, I made it to the Madison check point still 30 minutes ahead of schedule.

The ride on I-20 over to Augusta was uneventful and I was able to keep up my speed. From Augusta came a back road route to a suburb of Savannah. I was taken back at the shear beauty of GA17 south of Augusta. Coming into Savannah the Spanish Moss hanging in the trees around large farming plantations was a page out of the old south.

Next was a quick jaunt down I-95 to Brunswick. I was able to pick up the UGA football game on my headset at this point of the ride so it was nice to kill the time listening to the game and rooting for UGA to blow it (they did). I did find myself in the middle of a sportsbike group on I-95 which wasn't a big deal but I can't stand the way they speed and show off. But they didn't pay me a second look.

Riding from Brunswick over to Valdosta was a reverse of the Cape Fear route that I took earlier this year - even about the same time. Given the fact that the game was still on, traffic was light on US82 and I was able to continue to make good time. 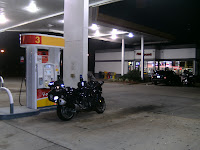 Pulling into the Shell station at Valdosta, I took a bit of a longer break than I had intended. I still was way ahead of schedule and knew all I had left was about 140 miles of interstate travel, so I lingered at the station watching the scene of people coming into and out of the station. After about 20 minutes, I headed north.

Pulling into the Chevron about 30 minutes early and seeing the ride sponsors was a great feeling. The Grubbs came over to congratulate me as I went into the store to pull together the documentation. Given the fact that it is a MTF sponsored ride, they handle submitting the documentation once they give it the once over. It will probably be a couple of months before I get the official certificate, but I am fairly certain that the receipts will be accepted by the IBA. I hung out with Quinton and Wanda for about an hour before heading across the street to crash into bed.

All in all, it wound up being about 1,030 miles in 17 hours and 15 minutes including a total amount of stopped time of 1 hour and 45 minutes. Therefore, I averaged around 59.7 mph with stops and about 66.5 mph while moving. Yeah, I guess I was moving when I was moving - but to be fair the route had over 500 miles of interstate travel (posted at 70 mph), about 400 miles of four lane divided highway (generally posted at 55 or 65 mph), and about 100 miles of two lane roadway with very little traffic on them (with the exception of the mountains).

I can see why collecting in-state certifications can become addictive. So I hope that this is the first of many in-state SS1ks for me.
Posted by ACCBiker at 9:44 PM