Due to a variety of work commitments, house projects, kindergarten graduations, and family vacations, I have not been able to get away on the bike for a couple of months. Not that I am complaining, it has been a good couple of months being with the family, but I missed the call of the road.

Therefore, when an open Saturday appeared and a RTE call was voiced, I jumped at the opportunity to ride over to Hickory, NC for lunch with the hope of catching a bit of the Blue Ridge Parkway. About 10 of the MTF guys met up for lunch and tire kicking. It was an easy ride up to Hickory from Athens being mostly I-85. After lunch a number of use headed up to the mountains and the Blue Ridge Parkway. Shortly before we got to the Parkway a hard rain/hail storm came upon us and we found shelter in an abandoned gas station. After a 30 minute delay, we headed onto the Parkway. The rest of the group only traveled about 10 miles before heading back to the Charlotte area. I decided to stay on all the way to Asheville. Overall, it was a beautiful ride but one filled with rain from time to time. As soon as I would dry off from the last shower, another one hit. Plus the Saturday afternoon leisure drivers were out in full - I know that the Parkway is not a private motorcycle course, but why people don't simply pull over a 10 seconds (okay 5 seconds) to allow a bike to pass is beyond me. Those few seconds would make everyone much more happy since I am sure that most don't like a bike inches from their bumper.

Overall, I think I came in about 490 miles and besides the rain storms that I had to contend with all after and early evening, it was a good day and I enjoyed the company of other MTF riders.

On Monday, Steve H. and I decided to get out and collect a few of the Lions Club passport book locations. 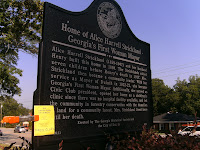 We hit Duluth just after rush hour, but traffic was still heavy as we made our way up to Dawsonville. 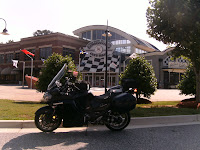 Once we left the Racing Hall of Fame, we traveled through Dahlonega (I had forgotten how beautiful the town is) we traveled up to Neels Gap and the Store which I had never been to before. After the Store, we hit a cemetery north of Helen before 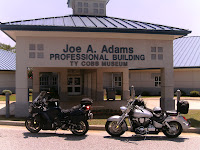 heading over to Royston and Ty Cobb's museum (why it is in a medical office is beyond me). We rolled back into Athens and hit Ben Epps just before 3 o'clock. Unfortunately, the office was calling and I needed to head in from that point. I like riding with Steve, but it is a lot of stopping (I even planned stops along the way to allow him to stretch). But it is fun to have a riding partner especially since most of the riding I do is solo stuff.