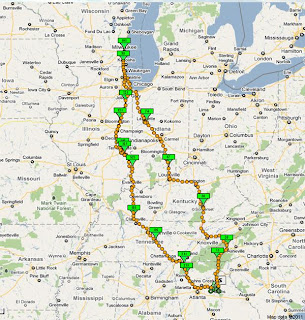 Okay here was the plan. Ride the bike up to Milwaukee - visit Purdue (fist time since 1993, catch a Brewers' game, go to a Stormwater conference, ride to Moonshine, and then home). Simple enough 1800 miles in about 5 days. And, believe it or not, it actually was minus the 90 minutes of rain that we had to ride through between Paxton and Casey (rain gauges in the area suggest that over an inch of rain fell during that time).

Leaving Athens on Tuesday morning was cold - upper 30's, it actually snowed a little the night before in the Smokies, but it was still cold and then very windy on the ride to Purdue. Got in about right on schedule and then explored the University a little the next morning. Some things were completely different, some were almost exactly the same. I can't believe it has been almost 20 years. Heading out of town lead me (by chance) into a field of windmills. Must be some sort of alternative energy experiment associated with Purdue. Riding through Chicago was hairy so I just stayed in the far left lane to minimize the direction that some of the vehicles could come at me. Milwaukee itself was fine - just cold, gray, rainy, and dreary. But the hotel was great - Iron Horse Hotel. It is a converted loft with a motorcycle (mainly Harley) theme. They said that I was the first one to ride in this year.

After the conference, I made it about 200 miles south to Paxton, IL. Small farming community not much to see - expect for the high school girls hanging outside the only bar that I found open. The next morning I headed to Moonshine to pay my respects to Terry. As I said earlier, not much to say about the ride down except for the rain (and rained it did). Met up with a Chicago rider on the way down (Ed) and it was fun to have some company during the storm. Miss Garmin sent us an interesting route through the fields of Illinois but it was all good. After a quick stop at the hotel to pick up the shirt and cinnamon bun - it was off to Moonshine with the others (good thing too since I didn't have the correct coordinates - didn't check them from S&T will in the future). After the burger and tire kicking, it was back to Athens. Not much to report, at times I really didn't want to be riding any more, but I would either stop or pick up another rider for a bit (thank you Gold Wing from Dalton to 316).

On the way up, I picked up a stop on the GA Lions tour and another one on the way back.

Interesting story while at Moonshine. After getting the burger (picked up by Ed - thanks), I sat down next to an older gentleman talking to a younger guy across the table. Didn't pay them much attention when all of a sudden the older man said something about looking for a "David Clark from Athens, GA while here" I said, rather nonchalantly, that would be me. It was Ronnie who made me my highway pegs. After quite of bit of disbelief that I actually sat down next to Ronnie, we had a good talk, saw each other's bikes, and wished each other well. Really good guy.
Posted by ACCBiker at 7:01 PM