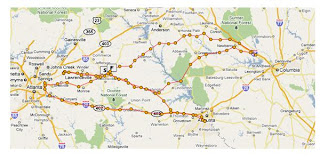 It was supposed to be three days of riding to really kick off the upcoming riding season. On Thursday, I took the morning off and rode over to Two Brothers Tires in Lawrenceville to get a new set of tires on - the decision was pretty easy once I picked up the nail with Roger and Tim. Tim did a great job - about $60 to put on the tires and the cost of the tires matched what most internet sellers were charging. I am definitely going back.

Friday morning was a ride over for a Barb-e-que lunch with other MTF riders. Up until then, I had only met a couple and didn't really care one way or another, but these guys were great and super friendly. Will definitely do this again. Wanting to see some scenery (plus the weather was perfect) I tried to take as scenic route over and back as time allowed. The town of Ware Shoals, SC may not be much, but the shoals are beautiful. Also, riding past the test track for Michellen was an unexpected surprise.

Saturday was supposed to be a ride with Steve but given his accident earlier in the week, I was on my own. Got off to a late start in the morning - didn't have everything ready - lessoned learned. So I moved on down US78 to meet up with Jim for breakfast. Again a really good group of guys. Then it was off to Sconyers for lunch. Many in the long distance community don't like group rides, but I actually enjoy them at times and it was fun zipping down I-20 as a group of about 20 bikes between Atlanta and Augusta. Lunch at Sconyers was good - though a little un exciting the weather held a number of people back this year. Leaving Sconyers, I got caught up in a pretty good rain storm for a few minutes but quickly dried off by the time I was in Thomspton. Given the weather, I didn't try and do much more than zip on back to help Marie since Landon had a birthday party to go to and she still had clients.
Posted by ACCBiker at 8:12 AM